RVK currently has the largest fuel cell electric bus (FCEB) fleet in Europe, with 37 buses already in daily operation and additional 15 expected to be in service by the end of 2021. All of the buses are powered by Ballard fuel cells. 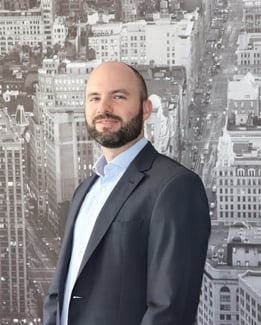 Here’s our conversation with Jens Conrad.

Can you tell us a bit about RVK?

We serve the greater area of Cologne which means that we do pretty much everything from urban traffic to suburban traffic to not so densely populated rural areas which is why we have a quite large area, which we are operating in. We're talking about more than 2,800 square kilometers of field of operation in which we operate with approximately 300 buses on daily service. 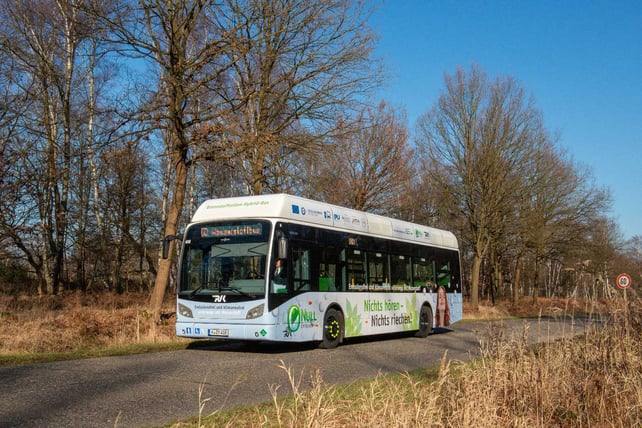 One of RVKs 37 fuel cell buses from Van Hool © RVK

What is your area of expertise in that whole ecosystem?

I started more than 10 years ago at RVK. When I joined the company, I was actually the assistant to the Chief Operating Officer. He hired me because that's when RVK started the zero emissions project in 2009/2010, which aims to transfer our complete fleet to zero emissions solutions latest by 2030.

We have a technology-open approach, which is quite important for us. So it's not that we're saying fuel cells are better than batteries or vice versa. We basically looked at all opportunities for zero emission transport and compared the advantages and disadvantages of the different technologies.

For us as a regional public transport operator, range and flexibility as well as refueling time are particularly important. Which is why we ended up quite early at fuel cells. For the last several years, I’ve been the project manager for that project, responsible for the buses as well as the hydrogen infrastructure.

RVK currently has the largest fuel cell bus fleet in Europe. Why did RVK end up selecting the fuel cell solution?

First of all, it’s important that we have a solution that is zero emission or close to zero emission. Back then in 2010, we started looking into different options. Battery was not as advanced as it is today, plus we needed a solution with a range of at least 250 to 300 kilometers, because that's the average our buses travel per day.

Furthermore it was our aim to find a technical solution that allows us to replace diesel buses, like for like, without changing anything in our operations schemes. The only solution that was feasible for us back then, and today, is fuel cells. 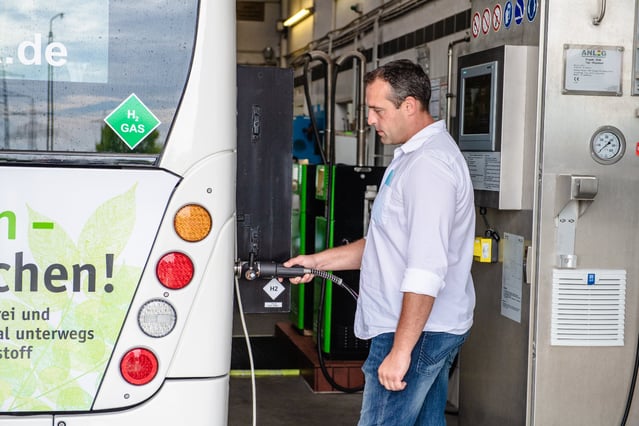 What are some of the reasons why the program is successful?

Another reason why we decided to go for fuel cells is that we have a lot of by-product hydrogen in the region. When you start the process, one of the first questions you always get is, where does your hydrogen come from, and how do you make sure that you have enough hydrogen when you need it?

In our case, that was never a question because there's a lot of chemical production here in the region of Cologne, where chlorine is produced and the by-product of chlorine production is hydrogen. We are talking about huge quantities of up to 20 tons of by-product hydrogen, per day. And that would be roughly enough to refuel a thousand buses per day.

So there's a huge potential and there's a lot of hydrogen already available for us. That's one of the success stories that we even have locally produced hydrogen, which we can then use in our buses, creating zero emissions which is very good in terms of air quality as well as reduction of CO2.

(To get a glimpse of RVK’s fuel cell electric buses in action, check out the video below.)

Can you tell us a bit about the new hydrogen refueling infrastructure that you are scaling up to fuel your growing fleet?

At RVK, we have a decentralized structure because as mentioned, we have a large area in which we're operating. We have several bus depots in the region and our goal is to have one refueling station for hydrogen at each bus depot. 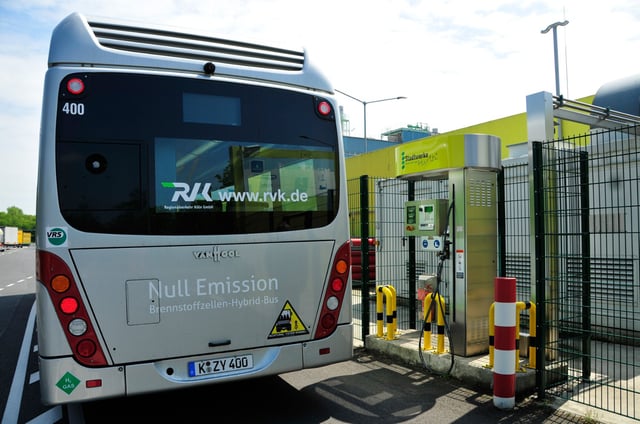 Fuel cell bus at the HRS in Hürth ©RVK

Currently we have two of our own stations which we already have set up. Both have a capacity of 20 buses. Again, that was quite an interesting project. I'm not sure if we would do it the way we've done it again, because it was quite challenging for us because as I mentioned, we are a bus company, so our core business is driving buses, not setting up infrastructure.

When we started, we didn't have the resources or knowledge around that. Now, we are good at that. When we started, there was a lot we had to learn. But again, the market changed. So when we started, our only option was to build our own station.

Right now, there are a growing number of companies on the market who for example offer solutions that you, as a PTO, only provide the land the infrastructure can be built on, and they will do the rest including supplying the hydrogen, etc. And at the end you just get a price which I would favor because they're the experts, right?

What advice would you give to transit operators? Considering the deployment of fuel cell buses, what are the top three things that you would say?

Number one, which I'm advocating is make sure that you know what you want. Before you consider the technology, make sure you know exactly where you want to deploy your buses. 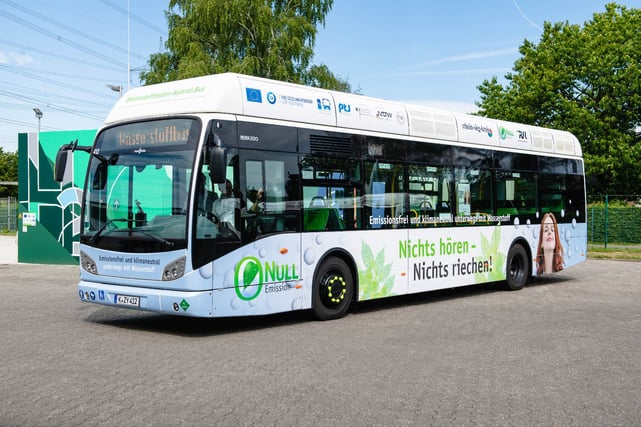 And after that then calculate the cost and then decide which technologies from an economic perspective are best for you, but also from the practical perspective. It doesn't make sense if you have to deploy three battery electric buses on the road, where before you had only one diesel bus, because they don't have the ranges. That will increase your costs.

So in that case, it does definitely make more sense to go for fuel cells. But on the other hand, if you have short routes, and if you have a stable electricity grid, why not go for battery buses? So make sure that you know what you want and what resources you have available.

Another one would definitely be, don't make things too complicated. So when we started out we sometimes over-thought lots of stuff. For example, when we tendered offers for buses, we had a specification, which was very long and detailed. And that's definitely not helpful. You don't have to describe the last screw or exact power supply because, on the other side of the table, you will have the expert, like the infrastructure guys who know how to build things.

So it's easy to tell them, “I have a lot of buses. I want to refuel that amount of buses back-to-back. And at that time window.” Then let those guys decide which technology is best for you.

Same with the buses: It doesn't make a lot of sense to define exactly what power the fuel cell should have and the capacity of the battery. Instead tell them, “I have this maximum speed, that demand for range and this is my topography”, and let them decide what to put in there. Because again, they're the expert, that's their job. 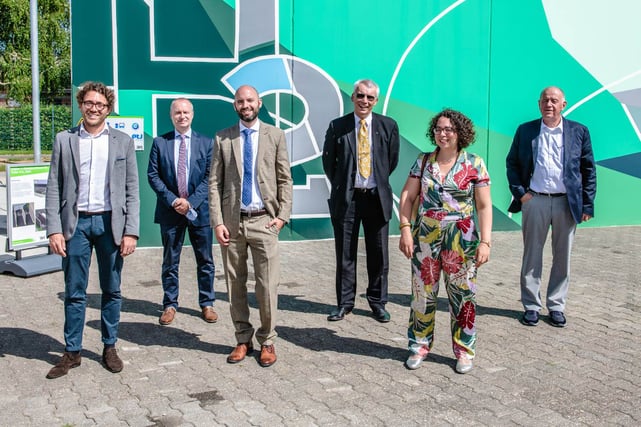 My last advice is never give up! Just go for it. I know at the beginning, like for RVK, it was quite difficult to see all the questions that you have to answer, like which bus OEMs, how do we get the infrastructure? How do we get the hydrogen, etc.

But along the way, you will learn a lot and your learning curve will be dramatic. Plus there is already a lot of information available from projects like CHIC and JIVE so you don’t have to start from scratch. Just get started and you will see that it works out at the end.

Note from Ballard: Today there are 1,236 fuel cell electric buses powered by Ballard technology in operation in Europe, US and China.