Here at Ballard, we are always inspired by the growing number of industries that are shifting to zero-emission solutions. And when it comes to trucks, the innovators at Kenworth are leading the way in reducing emissions.

Kenworth's new hybrid battery-fuel cell Class 8 drayage truck features a fuel cell power module supplied by Ballard, as part of the ZECT project. The project is funded by the Office of Energy Efficiency and Renewable Energy (EERE), U.S. Department of Energy and the South Coast Air Quality Management District. Kenworth’s fuel cell truck has successfully completed initial road testing, and was also displayed at the 2018 ACT Expo in Long Beach in early May 2018.

In this interview, we talk with Brian Lindgren, Director Research & Development at Kenworth. Brian shares his views on the biggest challenges around zero-emission heavy duty transport, as well as Kenworth’s experience with zero emission trucks. 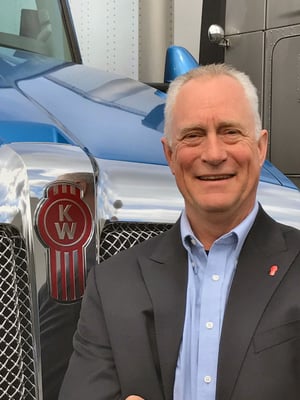 Q & A with Brian Lindgren on Zero-Emission Heavy Duty Transport

What are the trends in the industry pertaining to zero-emission and heavy duty vehicles?

We definitely see the need arising for zero-emission vehicles, particularly in California. The state and the local air quality management districts are trying to improve the emissions around the ports, including traffic to and from the ports. We figure it's going to start there and then expand to other areas.

It seems that drayage trucks that are going to be the first trucks to transition to zero-emission. What are your thoughts on that?

Yeah, I think that’s true. I believe that the move to zero-emission for heavy trucks is going to be mainly driven by emission requirements, rather than by a return on investment, payback, or savings of some kind. I think there will be a payback for those who switch to zero-emission, but it could take a while before we build enough trucks to get the cost down far enough to make it competitive.

If you want to be zero emissions, you pretty much go either battery electric or fuel cell electric. We don't see another good alternative. I don't think nuclear is a viable alternative for trucks in the near term. For trucks, if they are hauling only a very short distance, for example, less than 50 miles a day, battery electric can work pretty well. If you're going to drive longer than that, the fuel cell starts to look a lot better, because of the fuel density. Batteries are very heavy and expensive and they take a lot of space on the truck. We can pack a lot more energy on the truck, using compressed hydrogen in a smaller space. For a daily 50 mile cycle, does the size of the battery compromise the payload too much?

Not too much at that level. A truck that does only 50 miles in a day might be making a lot of stops, so you don't have a lot of energy use. Because of that, it could make sense for you to go battery electric in a shorter haul. But if you need to go longer, then the batteries really do start eating into payload and add cost to the vehicle as well.

What are the two biggest challenges specific to heavy duty transport and zero-emission?

I would say that the two biggest challenges are payload and infrastructure. Both fuel cell and battery electric vehicles today are heavier than the equivalent diesel product. So we have to be able to put together a whole electric power train and all the things that come with that, along with whatever energy source you have onboard. Payload penalty is an issue – if the tare weight of the tractor goes up, the allowable payload you can carry decreases by the same amount.

Infrastructure is also a current challenge, as there aren't many hydrogen fueling stations for heavy trucks readily available. There are some additional fueling stations that are currently being built, but right now there is no broadly distributed place to refuel a heavy truck with hydrogen. There are around 30 hydrogen fuel stations in California, but I haven't seen one yet that I would want to drive a tractor/trailer into to fuel up.

The building of the whole distribution network has got to mature. With the current infrastructure, drayage trucks are working because those vehicles return to the yard at the end of the day. So if you've got a fuelling station near the port, then you're driving past it every load.

So that being said, how is the market responding to hydrogen as an energy source to replace fossil fuels?

There are a lot of questions in terms of hydrogen that end users have.

I think we've pretty well addressed that. Yes, it can be very safe.

As mentioned, we're working on that and that can come fairly straightforward.

Can I afford it?

The technology today is pretty expensive but it will come down over time. The fuel itself is quite costly, but it doesn't need to be. The cost to produce it is fairly low, but currently the distribution is expensive.

Will I have enough power?

You can get enough power to make these trucks compete pretty favourably with diesel trucks.

One question that people aren't asking but should be is "How reliable can you make this vehicle?"

Today's early prototypes struggle with reliability issues but we do need to work through the whole reliability equation and make these trucks able to work for years without attention.

With the fuel cell being used in London’s transit system, and them getting  27,000 hours of operation, is reliability being proven? And is the same technology being applied into the heavy duty sector?

Yes, it is and I think the fuel cell is probably the least of my concerns on the whole truck. Take a look at all of the components in a truck, whether they’re electrical connections, high voltage, low voltage or fluid connections, air or coolant. If you total up all the connections you have a whole lot more on this kind of truck than on a diesel truck. So the more connections you have, the more possibility there is of one of those failing or coming loose.

Is Kenworth looking at taking the role as the integrator of the systems on the trucks?

We're sourcing components from others, but then doing the integration into the chassis ourselves. Figuring that one day we will want to build these in our factories, we're going to need to be able to source components that work together well and that can be put together with the highest quality and lowest price possible. So we’re looking at doing all that integration ourselves. At this point, we've built a number of hybrid vehicles but so far only one with fuel cells.

What are the drivers saying about the ride now that they're behind the wheel of a fuel cell heavy duty truck?

We currently don't have our fuel cell truck hauling commercial loads, but we have had quite a few people driving it, including a number of the truck press. We gave them an opportunity to drive it in February. They really liked the performance, especially the quietness of the electric powertrain. In terms of the ride of the vehicle, it really hasn't changed that much. The ride and the performance is pretty much like any of the other trucks we've built.

Now that the powertrain is so quiet, are the drivers able to hear any squeaks or sounds while driving the truck?

You can hear things that you’ve never heard before because it is so much quieter compared to the loud engines. Seats can make noise that you have never noticed that before. Fortunately, we didn't find too many of them, but you do start hearing things you didn't before. I think it can make you a safer driver because you can actually hear more of the traffic around you from inside as well.

I am sure that it is going to be a zero-emission future, and we're now at the entry point of it. Long-term, I think we certainly need to do whatever we can to move to zero emissions, and away from carbon-based fuels.

We have to be able to do this in a manner that makes sense for the company that's running these trucks, by making them affordable. It’s going to take some time, but the cost of the technology will come down. Incentives can help with reducing costs, which helps in the short term but isn’t sustainable.

Perhaps providing a different benefit to the user will help, for example, a green lane to get into the port. If you are zero-emissions, you would get to take that lane and everybody else has to wait longer. That still incentivizes things, and gives companies their payback in other ways. If the truck can haul another load or two, then they can make more money. Why not give the guys who are running clean a little bit of an advantage that way?

For more information on the benefits of fuel cell-battery hybrid architecture for drayage trucks, download our white paper below.