Since its inception in 2011, with just 50 attendees at the inaugural event, the International Zero Emission Bus (ZEB) Conference has seen sharp growth.

The latest sold-out event, held this September, brought together more than 500 participants to discuss opportunities in zero-emission transport at scale. 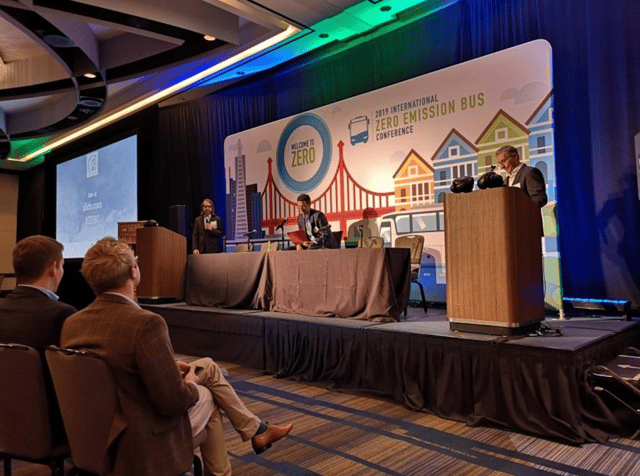 San Francisco made for an especially fitting home for this year’s event, given California’s mandate that requires all public transit agencies to gradually transition to a 100% zero-emission bus fleet.

In fact, transit agencies around the world are beginning their transition planning even before zero-emission regulations are implemented in their regions, recognizing that ZEB is the future of our transit industry.

Now that the necessity of ZEBs is a given, the conversation has turned to more practical matters of how to move away from conventional diesel buses.

A number of ZEB transit operators were on hand to share the practicalities of fleet integration and operation, including agencies from the United States, the United Kingdom, the Netherlands, Germany, Chile and Australia.

Throughout the two day conference, common themes began to emerge as transit agencies looked to industry to help answer the key questions that arise when implementing ZEBs at scale.

There were four central questions we noticed transit agencies were most concerned about. We’ll list them here, and then provide answers based on our own insights and the insights of other industry leaders at the conference.

1. Which ZEB technology is best suited to meet the needs of my transit agency?

That way, the agency can plan operations to best suit its ridership, rather than letting the ZEB technology determine operational parameters.

For instance, agencies that operate long, hilly routes in cold and hot climates can replace conventional buses with FCEBs on a one-to-one basis, rather than shorten routes or add additional buses.

Our infographic below illustrates the scenarios in which each bus type is best suited.

2. How will my transit agency pay for the transition?

Currently, there are incentives to ease the financial strain of transitioning to a ZEB fleet. This will not always be the case.

Moving towards a non-subsidized commercial deployment is important to the California Energy Commission, and the California Air Resources Board (CARB), as well as regulators around the world. ZEBs are already on track to be at purchase cost parity with conventional transit buses within ten years. 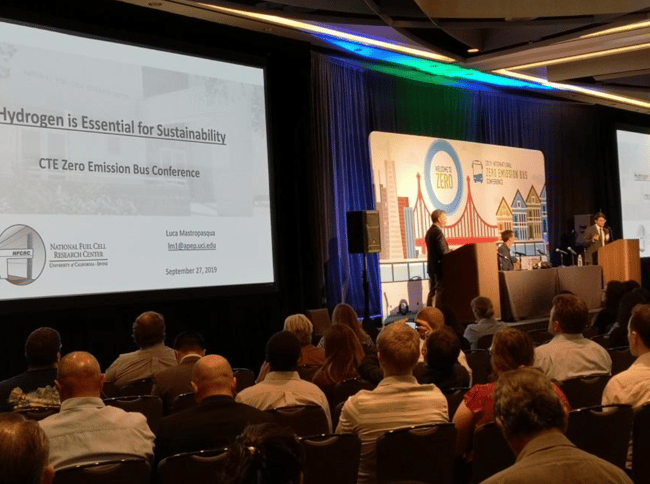 Hydrogen fuel has the opportunity to deliver a sustainable business model, which will not require long term subsidies for infrastructure, once there is sufficient demand to stimulate large scale production. This increase in demand is expected to bring more providers to an already competitive marketplace, further increasing production and driving down fuel prices.

3. What infrastructure is required to power a ZEB fleet?

Time and again, conference participants indicated that the infrastructure rollout was the most challenging aspect of deploying BEB at scale. Grid upgrades to access the multi-megawatts of power required takes years of planning, if it is possible at all. Depot charging infrastructure for BEB fleets reduces the amount of space available for buses.

On the other hand, hydrogen technology delivers scalable infrastructure with minimum impact on the depot layout. And the hydrogen refueling network can be developed by leveraging the existing CNG network.

There is also the financial aspect of building out the charging or fueling infrastructure. Overnight charging of battery electric buses typically requires one charger for each bus. At the scale of 100 buses and 100 charging stations, a transit agency may exceed its electricity capacity, requiring expensive grid upgrades in addition to the purchase of the actual chargers.

In contrast, hydrogen fueling infrastructure does not require any major utility upgrades. Hydrogen filling stations at transit depots are built to be scalable. The equipment is similar to a CNG station and a station can simply and cost effectively increase its capacity from 10 to 100 buses by upgrading the compression and storage equipment and adding dispensers.

As the number of fuel cell electric buses in the fleet grows, the cost of the hydrogen fueling infrastructure per bus actually decreases. 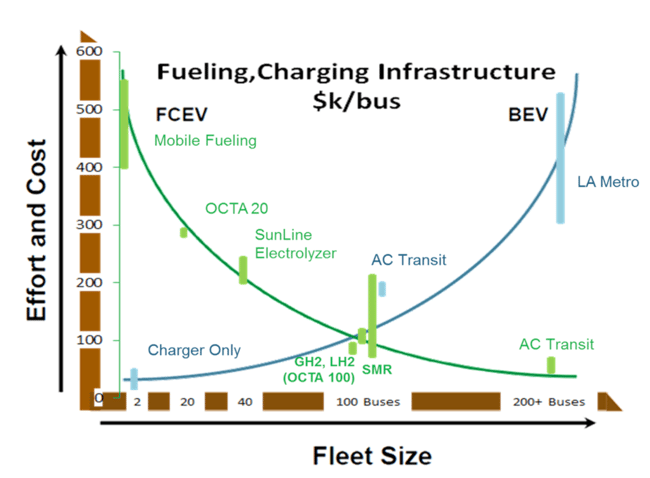 Based on data from publicly released reports on scaling up infrastructure

4. Will my ZEB fleet be resilient in an emergency or power outage?

Access to transit is considered an essential service by many, especially in disadvantaged communities. And, in an emergency, buses can play a lifesaving role in transporting the injured or sick.

The question then arises of what will happen to BEB fleets in the event of a prolonged power outage or emergency situations. How will the buses be charged for service?

Hydrogen stored on site at the bus depot will ensure transit agencies avoid this issue, providing multiple refuelings for each bus. Fuel cell electric buses can also be used as emergency power generators during natural disasters.

The 2019 ZEB Conference clearly demonstrated that both BEBs and FCEBs have benefits. Both will be part of the 100% ZEB fleets of the future.

As transit agencies look at options to meet new regulations, it’s critical to keep an open mind and conduct due diligence by looking at both options available today. Evaluate how each technology will enable the easiest transition to ZEBs at depot and fleet scale including:

Depending on each agency’s specific environment, either fuel cell or battery—or a combination of both—will be the best option. Start from a technology-neutral perspective and ask bus and infrastructure providers to offer you the most suitable zero emission solution for your agency.

Now, it’s over to you. What do you think is the biggest barrier to the implementation of ZEB? How can we work together to make zero emission transit a reality?

Download Hydrogen at Scale for Fuel Cell Electric Buses: California Case Study below. This informational was jointly authored by Ballard and Nel Hydrogen and it provides:

Discover why hydrogen is a path to competitive and affordable 100% zero-emissions well-to-wheel operation for transit fleets at scale.