Today, we have the privilege of speaking with freight industry leader, Rick Mihelic. Rick is the Director of Future Technology Studies at the North American Council for Freight Efficiency (NACFE).

In this conversation, Rick shares:

Let’s get started with our discussion with Rick Mihelic.

Rick, can you tell us a bit about yourself? What is your area of expertise and what are you passionate about? 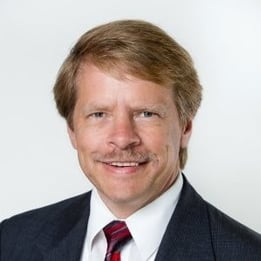 We've evolved my job title just recently to be Director of Emerging Technology because the speed of technology innovation is accelerating and things that were “futuristic” are now actually emerging deployable technologies.

I've got 38 years of transportation industry experience. I started off, a very long time ago, working as a co-op student at Freightliner.

Later in my career, I worked 20 years for Peterbilt on many interesting projects, including the Cummins/Peterbilt Department of Energy SuperTruck program, which I am one of the patent holders on the exterior aerodynamics for that project.

I've been working with the North American Council for Freight Efficiency since 2014, doing research reports on a variety of technologies from aerodynamics to fuel economy.

In the last couple of years I’ve been focused on freight electrification specifically battery and fuel cell electric applications. 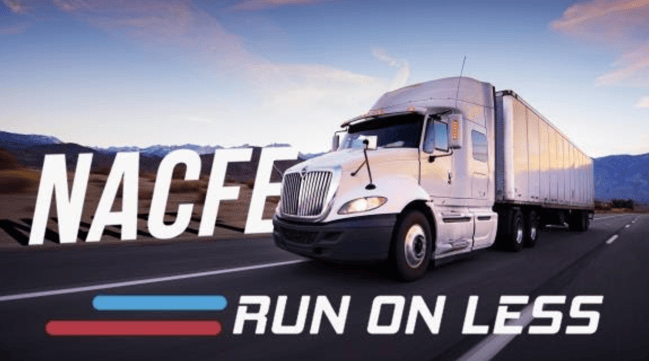 Can you tell usa bit about NACFE? What is the Council's mission?

NACFE started just over 10 years ago out of a consortium of fleets, transportation industry groups and nonprofits who all realized there was an overwhelming amount of information in the world on trucking efficiency, but a lot of it was biased.

What they were looking for was a group that could filter through all of the information and report on efficiency improvement technologies in an unbiased way.

We were tasked with helping define the truth on various technologies, what the positive and negatives were and give a really objective evaluation of information.

Part of the mandate was also to demonstrate the technologies. So, in 2017 we ran an event called Run on Less where we had seven current production trucks driven by very good drivers working for fleets over a three week period.

They managed to demonstrate that efficient drivers can get upwards of 10.1 miles per gallon on average in real world conditions with real world freight loads. 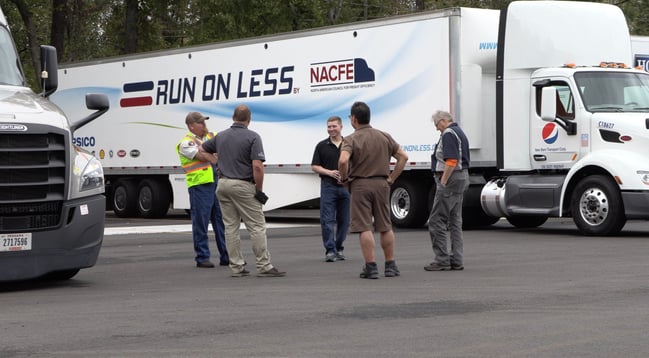 We repeated the trial in 2019 with the Run on Less Regional event that focused on 10 trucks looking at a regional hauling, which has a lot more stop and go activity. And in those fleets, the consumption averaged 8.7 miles per gallon.

Part of our role is to show what's real. There's a lot of this information in the world - our purpose is to provide advice and accurate information on new technologies to make freight transportation more efficient.

What are the advantages of a fuel cell heavy duty truck when compared to a battery electric solution for the same vehicle? 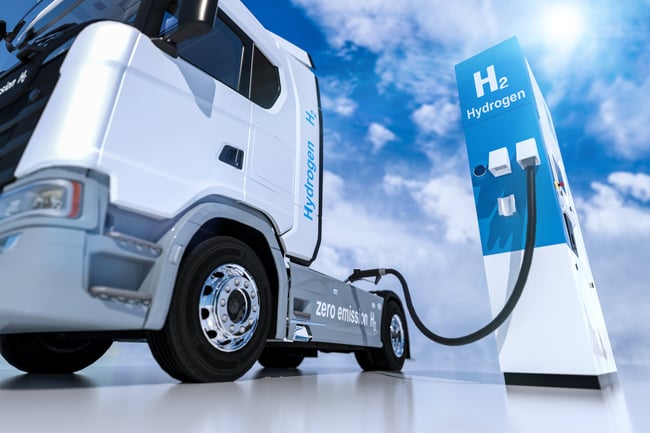 With the trucks, there's no one solution that’s a clear winner in all categories.

Diesels have been prevalent in the industry for a hundred years because they tend to be able to be used in a lot of different roles. The same truck can fill several different applications.

As we get into electrification, we find that different technologies really are optimized for different parts of duty cycles.

For example, shorter distance hauls, what we call drayage, running loads from a cargo ship to an inward warehouse. Those are approximately 50 to perhaps 100 mile round trips.

This application seems to be well suited for battery-electric vehicles.*

Where hydrogen-fuel cell solutions excel is on the longer distance routes. The target there would be long haul as a replacement for diesel.

Many times I’m in discussions where people want to compare one vehicle to another as if there’s only one best solution.

Freight has many duty cycles and there may be several solutions to replacing diesel in the future. Both fuel cell and battery electric share elements, like batteries, electric motors, and so on.

So, the electric drive trains are fairly similar between the two. Both make use of batteries.

* Once a drayage truck covers multiple deliveries per day and operates on long shifts, then fuel cell technology makes sense.

Often companies want to choose a technology solely based on the purchase cost. What are the pitfalls of this approach? 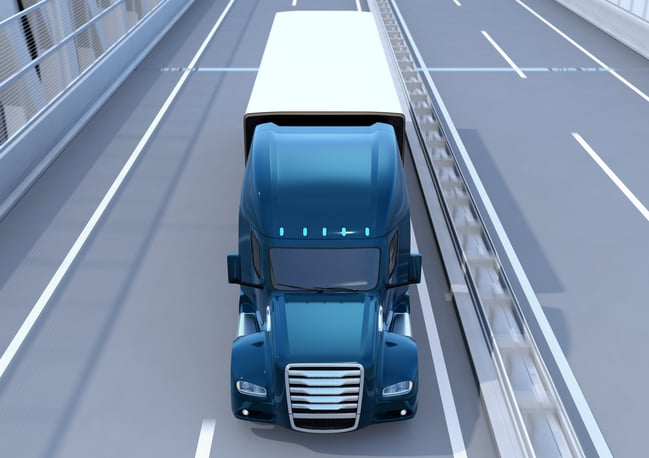 Purchase cost is very challenging with these new technologies. All of the alternative fuels tend to be higher list costs than the diesels that they're targeted to replace.

To offset that list price issue, there's a number of grants, incentives, and programs that help bring the price down to something more in line with the diesel that they're replacing.

There are also savings on operational costs to include in looking at the total cost of ownership of a hydrogen vehicle. In the long run, the price of the vehicle may or may not be as significant as the operating costs paid on an ongoing basis.

If you think about buying a high-end luxury vehicle versus an economy vehicle, when you go to trade that vehicle in it at a later date, it has a residual value.

Well, if that residual value remains fairly high, the actual dollar costs that you pay are fairly comparable to the lower cost vehicle that didn’t maintain its residual value.

I think that the jury's still out where residual value will be with hydrogen fuel cell vehicles. We know from the operating cost standpoint, they're likely to be much less in terms of the operational costs like maintenance.

So there are a lot of reasons why total cost of ownership will probably be less for hydrogen fuel vehicles.

(Editor’s note: Learn more about total cost of ownership in this report jointly authored by Ballard and Deloitte.)

When thinking about fuel cell trucks operating on compressed or liquid hydrogen, is there anything we can learn from what's happened with the introduction and adoption of the CNG or LNG vehicles? 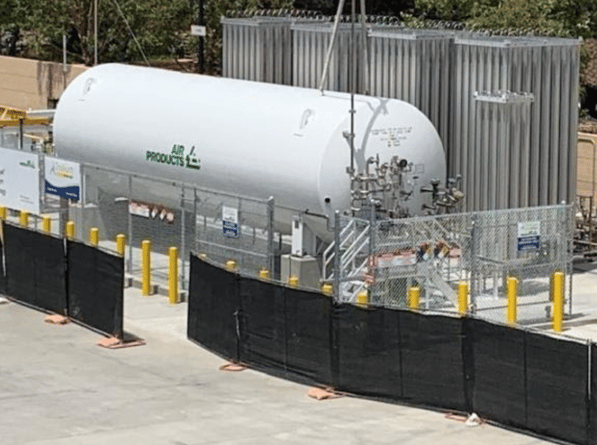 That's a really good question. The CNG and LNG vehicles had a great deal of media coverage back in the 2009-2011 timeframe when they seemed to be taking off as a viable solution, as a replacement for diesel.

Unfortunately, there were a number of competing factors that came into play including the price of diesel going down.

The availability of oil in the world increased dramatically with fracking and opening up a few new oil markets that had been closed in the Middle East.

CNG now has a fairly solid reputation. The technology has been through several iterations. It's mature, it's operating well today, but it just had some challenges from a timing standpoint with the competition with oil-based vehicles.

The situation with hydrogen is going to be a similar concern because the price of hydrogen needs to come down significantly. And that depends on volume increasing in terms of market share.

The production needs to go up as the demand goes up. As the freight industry gets more invested in the infrastructure hopefully the price of hydrogen then comes down.

Hydrogen has a similar risk position today as did LNG and CNG back in 2010-2011. There are other competing things going on and some factors are not controllable. We'll have to see where that goes.

Well, I’d just like to reinforce the first comment I was making that the future will see a number of alternatives to diesel.

At NACFE, we call the near future the “messy middle” where all these innovative solutions will compete and find success or failure for different segments of the market. We've published a few articles on that.

We’ve also recently published a report that compares similarities and differences in the variety of alternative fuel powertrains as the industry goes through this  “messy middle”.

There are many competing technologies that will hit the road in the next few years and they're all going to have pluses and minuses. No single one of them is exactly an ideal replacement for diesel.

There'll be parallel implementations and it's really not about which one is better than the other.

I think where we're going is that some are better in some duty cycles and some are worse and each is going to find its niche market in the near term.

We need to give all of these technologies a chance to mature enough so we can properly evaluate them rather than making decisions before any of them are actually out on the road in volume.