Drones (or UAVs) are transforming operations in a number of industries, including infrastructure inspection, agriculture, search and rescue, mining, and more.

But which technology can truly deliver the most cost-efficient (hence profitable) performance? This article explores how hydrogen fuel cells can solve many of the shortcomings of batteries, with none of the noise, pollution and reliability issues of internal combustion engines.

What are the challenges of using battery power?

Today’s small to mid-scale electric drones are powered by batteries. While batteries cost far less than any alternative solutions, they’re quite costly—in terms of total cost of ownership and practicality on the job—because of restrictions in flight time and battery management issues.

Flight time for battery-powered drones is very low, typically in the 15-45 minute range. This restricts their potential applications. 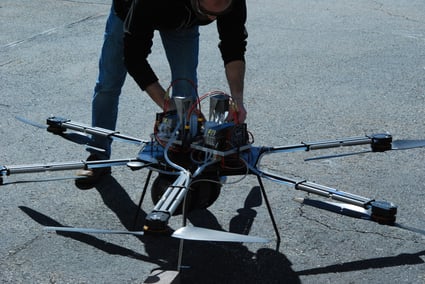 On a typical working day, battery powered drones spend less than half of their time in the air, as operators swap out batteries and deal with other logistical issues associated with battery powered flight.

To put it another way, more than half of the drone’s working potential is lost, which is bad for operational costs and profits.

Battery life is another challenge: a drone battery’s typical service life is six months (with daily use). So every six months, operators must source new, expensive, batteries to replace the old ones.

A typical drone requires two lithium batteries that weigh four to five pounds each. In the field, an operator needs enough replacements on hand to keep the drone in the air long enough to fulfill its mission.

Then there’s the question of transporting a drone—and its complement of batteries—to the job.

Batteries are restricted on most commercial airlines. Many operators are forced to ship the batteries separately, via ground transport, which often requires paperwork and certifications, and is slow and costly process.

Maintaining a battery storage and charging facility is labour-intensive

A professional drone operator needs to seriously consider the infrastructure of battery recharging, storage and management.

There needs to be adequate charging for enough batteries to keep drones in the air long enough to complete their designated tasks. Then there’s the need to store a complete kit of batteries in a safe, dry location. Not to mention the need for a tracking system to ensure the timely replacement of aging batteries.

What about internal combustion engines?

Additionally, the total cost of ownership for IC powered drones can be surprisingly high. Typical engines require an overhaul after only 200 to 300 cycles, or 600 to 800 working hours. That level of service means a frequent need for spares and qualified service staff.

For longer flying times and simpler logistics: Hydrogen fuel cells are the solution

Fuel cells by the numbers:

The initial purchase price of batteries is lower—but when the total operating costs are considered, the economic picture changes.

Factor in longer airtime—in a profession where airtime is where revenue is generated—and fuel cells become the far more practical and profitable choice.

The initial purchase price of a fuel cell power system is higher than batteries or internal combustion engines.

However, a fuel cell system costs less to operate: reliability is greater than internal combustion engines, and there’s no need for spare batteries and the entire battery charging/storage infrastructure.

Do the same job with fewer drones

With more flying time per drone, a business can reduce their fleet size by 30-40%, compared to using a battery platform.

Fuel cell drones have the quiet, clean characteristics of battery-powered drones, with triple (or more) flying time. This opens drones to many new potential applications, and makes many current uses more profitable.

With the reliability of electric motors, and the extended flying time of fuel cells, operators will find they can do the job with fewer stops and starts, fewer inspections, fewer parts swaps—and keep more drones in the air with less field staff.

Together with our partners, Ballard has developed a complete turnkey solution for hydrogen fuel cell drones, comprising:

Here’s a breakdown of all the components:

The fuel cell is the component that converts hydrogen into electricity.

The FCair™ system’s liquid-cooled fuel cells are robust, rugged, and designed for efficiency.

They operate effectively, independent of climatic changes and are less affected by pollution issues (which can cause startup and performance issues for air-cooled drones.) 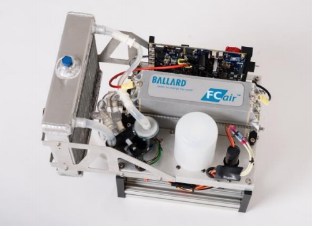 To store the hydrogen fuel onboard the drone, the FCair™ system features a 6000 PSI-rated hydrogen fuel tank. As the platform matures, we plan to expand our range of tank sizes and work with industry to standardize fittings for a variety of capacities and energy requirements.

Working with strategic partners, we are developing optimized lightweight fuel regulators, to take fuel from the high (6000 PSI) pressure in the tank, down to the 10 to 15 PSI that is fed to the fuel cell.

An essential component of a fuel cell-based drone solution is the means to transport hydrogen to the job site and refill drones on site.

Together with our partners, we’re developing a cascade refueling system, which would allow operators to refill tanks safely and simply with the simple push of a button. Our cascade refuellers are in the early stage, and we are working to reduce their size, weight, and complexity.

(Learn more about hydrogen refueling methods in What Are the Refueling Options for Fuel Cell Powered UAVs?)

As for the fuel itself, operators won’t have to find a source of commercial hydrogen.

In collaboration with a number of partners, we’re streamlining the qualification and delivery process to create a safe, secure and simple process for delivering hydrogen tanks to customers in the field.

We are also exploring technologies to generate hydrogen from electrolysis. This will allow fuel cell drones to be used in remote areas where commercial hydrogen is not available.

Drones—both multi-rotor style and fixed wing—continue to prove their worth in myriad applications in many industries. But they continue to come up against the limitations of current power technologies.

Internal combustion engines are polluting, noisy, and service-intensive. Battery-powered electric drones are quiet and effective, but flying times are short, and battery recharging and management is a headache.